Posted on October 27, 2018 by ottawadeafgirl 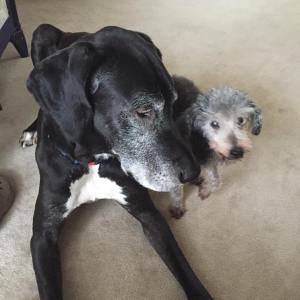 It has been one year since you crossed over the Rainbow Bridge and not a day goes by that I don’t think of you. It was difficult during the first little while. I kept seeing you everywhere, almost like your spirit was still with me.

In the last couple of days, my grandson Gabriel has been asking about Walker. 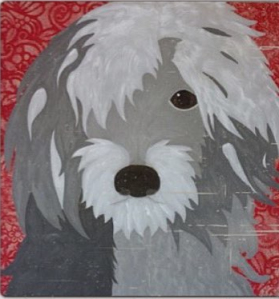 My sister made this painting a few years back and it hangs in my dining room. This kind of caught me by surprize as I hadn’t realized the one year anniversary of his death was soon approaching. I found this article helpful in talking to toddlers about death, it is important to stick to the facts.

I miss you Walker! Thanks for being so devoted to me for over 15 years, you will never be forgotten! #GonebutnotForgotten 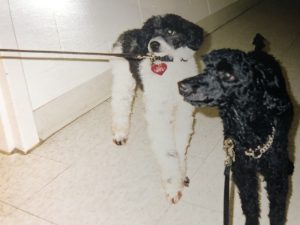 Walker (right) with his brother Willy who is also a Hearing Ear Dog. (2003) 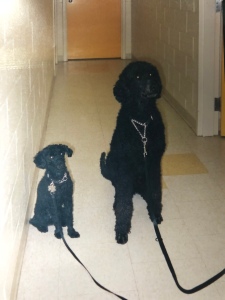 Walker (left) with Kelso his best buddy during our 2 weeks of training at the Lions Foundation of Canada in Oakville, Ontario (2003) 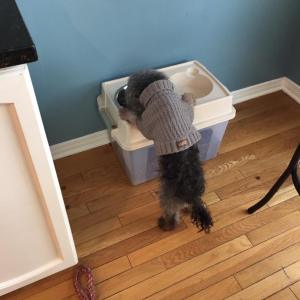 Walker always loved to eat out of George’s large bowl. He had his own, but for some reason this was better.

Looking forward: Not long before Walker passed, I discovered George could alert to the smoke alarm which was a great comfort for me. The smoke alarm has gone off a few times accidently during cooking and every time George has responded with great enthusiasm, actually, if he could eat the smoke detector, I think he would!! I am still trying to teach him to bring me outside afterwards; we’ll keep working on that, but there is no doubt that I would ever be in danger during a fire, that is for sure!

A deaf and hearing awareness blog

Keep posted on events happening in and around Canada's national capital!

No Pills, No Surgeries, No Excuses, No Regrets

“We are what we repeatedly do. Excellence, therefore, is not an act but a habit”. Aristotle